Masking Is No Mystery

Once you have cleared the room of everything possible, now it's time to mask before you paint.

The kind of tape you use for indoor masking matters. Consider the material(s) it needs to adhere to and later be removed from, and how much later it will be removed. The tan-colored product most people call “masking tape” is good at affixing paper or plastic to a wall. Its width varies from three-quarters of an inch to 2 inches. Masking tape has considerable sticking power; after just an hour or two, it may already be hard to take off a surface. If it’s located in a hot, sunny room, it’ll stick to the wall even more firmly.
A fine alternative in these instances is blue painter’s tape. It’s designed to be safely removable, which is especially handy when you’re working with relatively fragile wall or ceiling materials (e.g., fiberboard). The box or platic it comes in should indicate how long you should leave it on the wall, though in general tape should be taken down as soon as it’s no longer needed. 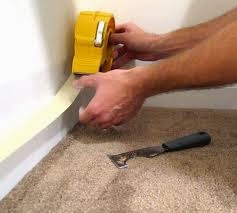 Some kind of finish, like enamels, break down tape’s “glue.” Fortunately, you can buy tape whose sticky stuff can stand up to virtually every kind of paint. Whatever your tape of choice, make sure it won’t lose its adhesive power when it comes into contact with paint.

The Masking Process: What to Use as Sheeting
First of all, even though it’s cheap, resist the urge to mask with your morning paper. As your lawn sprinklers may have informed you, newspaper falls apart when exposed to water. It can also stain things, as your fingers know. Unless you’ve using a paint that is particularly prone to dissolving things (lacquer and enamel are examples), brown kraft paper should do the trick. If your paint does contain a powerful solvent, invest in green masking paper, whose adhesive won’t dissolve.
When it comes to plastic sheeting, thin is not in. A handheld device that’s currently on the market applies thin plastic (or paper) and tape simultaneously, which saves time. If you’re not using this kind of machine, however, go with thicker plastic, in the form of masking film. Because it has some heft, it’s more manageable than the thin stuff, and it comes in widths from 24 to 99 inches. Another plus: You can get masking film in units based on common door and windows proportions.

Return to Website
Posted by Unknown at 6:08 PM No comments: